As I sat in the back of our drivers car, staring out at the flat desert landscape, listening to Arabic music through the car speakers I wondered about all of the stories and events these lands must have seen. There is a certain mystique in the desert, like things happen there but they are all secrets kept in the sand.

Some of the things that have happened are dinosaurs. We were lucky that the dinosaur museum, complete with a huge dinosaur outside was open during Ramadan daytime hours. As we toured this museum we were in awe of the millions of years old specimens and bones they had neatly displayed. I have never held anything in my hands that are over a million years old let alone tens of millions of years. It was really impressive and incredibly fascinating.

When we walked out of the museum the dry desert heat felt as though it was suffocating me. It became laborious to breathe as the heat pressed on my lungs and my body slowly stealing all of the liquid out of my body. I became instantly thirsty (which was a problem since we were trying not to drink water in front of our drivers because it was Ramadan). I don’t get hot easily, in fact 85 degrees is about perfect temperature for me. This was different, it wasn’t even heat it was forces of dry air mixed with heat attacking my body and resources. Immediately I understood why no one was out of their house during Ramadan, with no access to water it wouldn’t take long for a person to be in trouble.

The last 20 minutes we drove without passing a person, a car, or any sign of life. The gates of Merzouga greeted us with the same slightly unsettling stillness. The town showed no sign of life or movement aside from a man who approached our car asking if we needed a place to stay, a guide, or wanted to buy something. We drove away and on to our hotel through sandy streets, waves of heat dancing across the desert landscape and buildings the same tan color of the sand which surrounded them. It was the most intense entrance to a town I have ever experienced. It seemed as though we had reached the end of the earth and no one was left to welcome us. 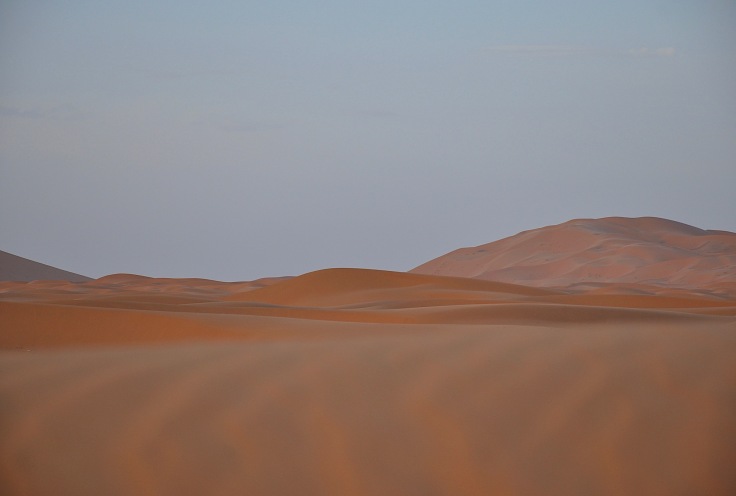 Our Riad in Merzouga was one of the most otherworldly experiences I have ever had. We were alone in the Riad minus the three men who ran it. Because of Ramadan they were resting a lot so J and I had the place to ourselves. We would sit in the pool, hidden behind the sand colored walls, and listen to the complete silence. I have never experienced complete silence like this except for the day after 9/11 when there were no planes in the sky and no noise on the streets. When we were outside of the pool it was so hot that instantly our mouths were dry and our noses burned. We would jump into the cool water of the pool to escape the heat and the minute we got out the desert wind would chill us to the bone. Have you ever been swimming in 108 degree weather and gotten out of the pool only to freeze until the water was dried off of your skin? The weirdest experience!

We spent most of our afternoons in the pool, or in the air conditioning of our room, eating our only lunch, whatever chips, nuts, cookies or candy we had that we were going to ship home as souvenirs of food from around the world. There were no stores open to shop and no restaurants were open due to Ramadan. We watched a lot of Netflix, read and napped.

In the mornings we went out in the 4 x 4 with a guide, driving through the amazing orange sand dunes of the Sahara. We explored the quartz mine, the empty riverbeds, discovered wild camels, nomad camp sites and marveled at the beautiful contrast between the black lava rock dunes and the completely untouched sand dunes. The contrast was so beautiful as the black rocky landscape would give way to the pristine orange sand, like an ocean tide as it recedes on the beach. Our guide was great, teaching us a lot about the Berber culture, the Nomadic people and the philosophies of the Islamic people. He too emphasized how important it is in their religion to love and honor all people, showing no prejudice for any religion. He shared with us the gentleness of the Berber culture, and deep passion for the earth surrounding them.

In the evenings J and I would marvel at the brilliance of the desert. We would walk through the edge of the desert, just outside of our hotel, stand on top of dunes listening to the silence, or sit on the roof top deck of our Riad marveling at the glorious creation in front of us. The few people we did see were so friendly and kind, it was a beautiful contrast to what we experienced in Marrakech.

Our nights were spent dining by the pool by the soft Moroccan lanterns eating the best tagines in Morocco and getting to know the three men who operate the Riad. They were so much fun. With unemployment being so bad in Morocco many people work far from their homes and only see their families once a month or less. One of the men here was no different. His wife, children and mother all live together in a town about 4 hours away. Once a month he gets to return home to visit them and stay for a few days before returning back to work. We shared pictures and stories of our families and the vast difference between our culture and theirs.

On our last night as we sat on the rooftop deck (this never lasted more than 15 minutes because of the heat), drinking water and waiting for the sun to set. J and I became so overwhelmed with how lucky we are to be living this life. We were realizing a dream to see something so few people are ever fortunate enough to see. We both shared stories about how we each learned about the Sahara in school, it was a far off exotic land, untouched by most. I don’t think either of us ever thought to dream of coming here, yet as we sat watching the sun fade behind the mountainous dunes we felt like it was always meant to be this way. We were blessed to be alone here, in a time when almost no one travels to this part of the world. In that moment it was just us, and nature. I don’t think there have been many moments as powerful as this for either of us before.

(As a side note I want to tell each of you, realize your dreams, no matter how big or small, and when you do, take a moment to enjoy it, to feel it, to give thanks for it, and to realize how blessed you are. There is little else as good as this in life.)

If you are planning on traveling to Morocco make sure you check out my Do’s, Don’ts and Things to Know before you go.

2 thoughts on “Merzouga and the Sahara Desert”