I have dreamed of Morocco for years. I have been in awe of the architecture for as long as I can remember. I dreamed of walking around in the medina’s, sitting in café’s watching the people and shopping in the souks. The Morocco I found was much different than what I had imagined. Unbeknownest to me we travelled to Morocco during Ramadan. This had its pluses and minuses for sure but I think overall I am glad we went during this holy month. While many restaurants were closed, there was no alcohol available at most places we were able to avoid the crowds of tourists usually found in Morocco and were able to observe a different part of their culture.

We started our trip with a quick day in Casablanca, visiting the Hassan II mosque which was absolutely stunning, sitting majestically on the corniche waterfront. It is the largest mosque in Morocco and the 13th largest in the world. 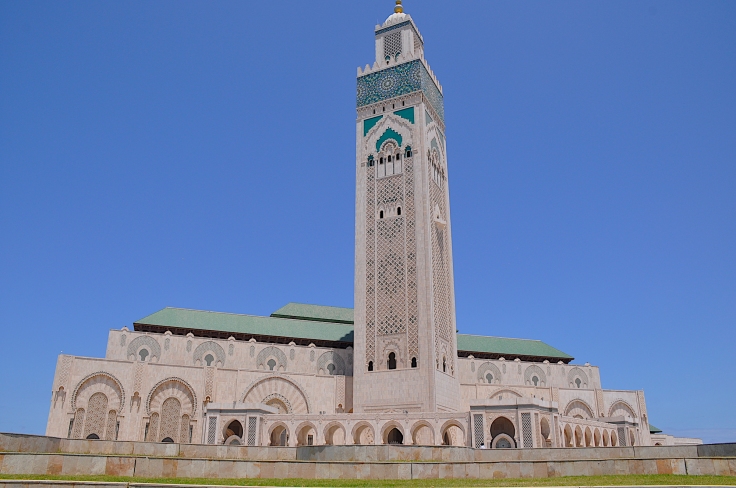 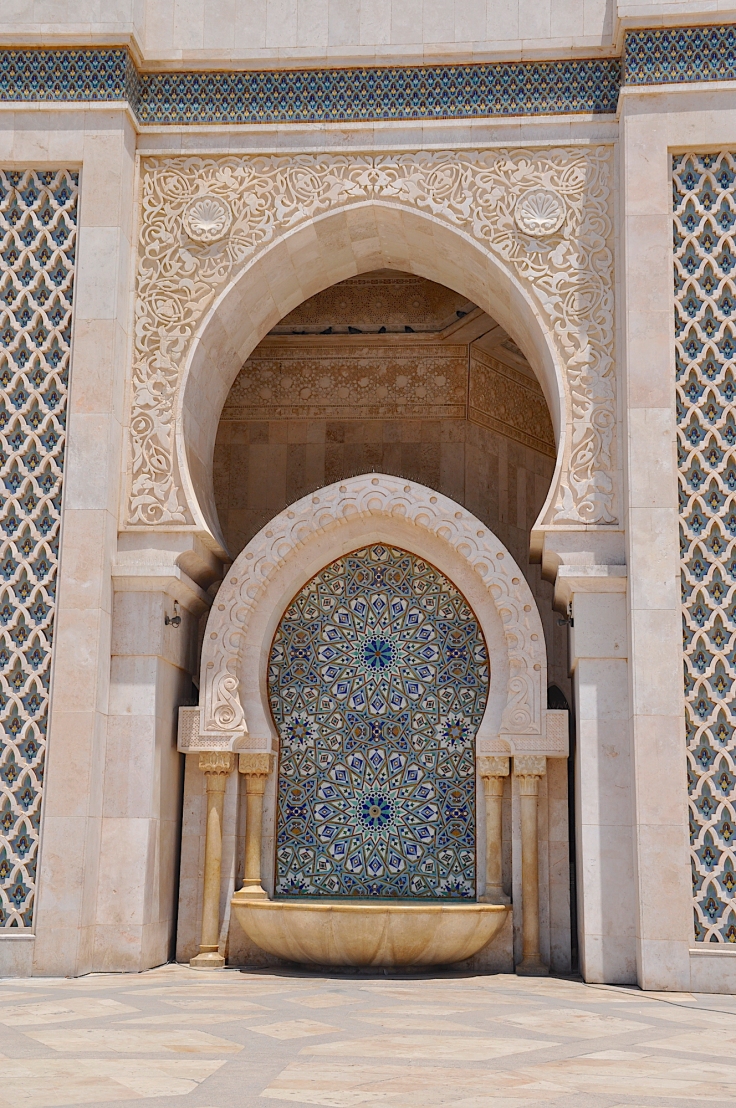 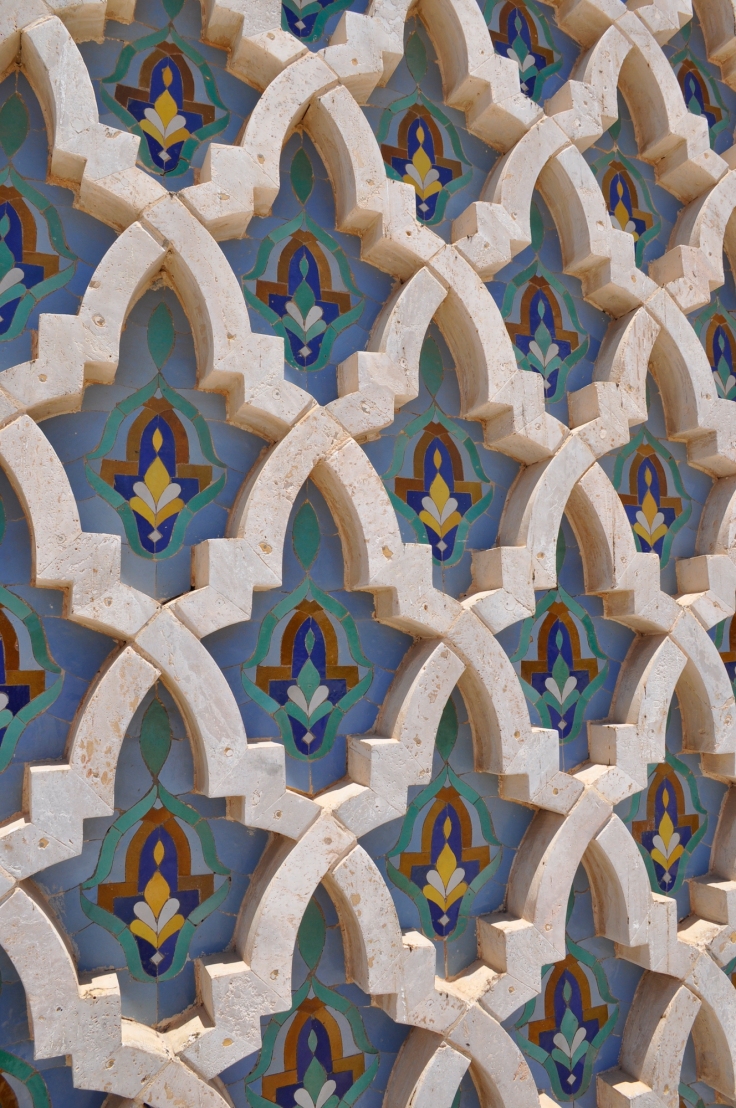 Then we headed to Marrakech by train. The architecture was so foreign to me as we approached the medina. Every building was the same color, almost identical to the surrounding mountains and desert. This is actually a law in Morocco. Any building must be painted to match the surrounding landscape so as not to intrude on the balance between the land and the sky. I loved this so much and it really made a huge difference in the landscape as we traveled. (The grey houses are unfinished and the pink building is the mosque.)

We stayed just inside the walls of the ancient medina in the most gorgeous Riad. A Riad is an old home, built in a square shape with an open courtyard in the middle. I was immediately entranced and blown away but the tile work, the woodwork and the gorgeous view from the rooftop terrace. I was in love!

Our first night everything changed for us, and unfortunately set a tone for the rest of our trip. We decided to “get lost in the medina” as everyone recommends. Well, we didn’t actually intend to get lost we wanted to walk through the medina to the “Big Square” to have dinner and see the nightly activity. We were warned not to follow anyone if they offered as we left our Riad. The medina’s are like mazes with narrow streets. Picture a labyrinth. There aren’t street signs and truly the only people who know how to get around are the locals. This is definitely NOT a good thing. As we walked men and teenage boys would say, “Big Square that way” and point, often times they were not telling the truth, or contradicting each other as a game. It started to put us on edge because we realized we couldn’t trust what anyone was telling us. At one point we walked down this street to have a bunch of younger guys tell us the entrance was closed because of Ramadan so we had to walk a different way, they were blocking half the entrance to the street. It is now dark and we feel quite uncomfortable. A guy walked by and pointed us in the “right” direction. From there we walked and he was in front and occasionally would turn to ask us something or tell us something. My skin was starting to crawl, I was getting very uncomfortable and felt like something wasn’t right. As we got closer to the Big Square he turned to us and started to demand we give him money. My husband said no, so the man got louder and more aggressive. Then another man walked around the corner with a large walking stick and started screaming at us to give him money. We kept walking, hoping to find someone on the street to help. We ended up in a square, with the man still screaming at us, when he realized we weren’t giving him money he grabbed J’s arm and started to berate us with a phrase we would hear many times throughout our trip, “you happy now tourist? You a happy tourist?”. He practically split the words on J. Luckily the square must have scared the kid off because J was at his limit of what he could take and had told the guy to get his hands off of him and get away from us. Then, when the guy saw two shop owners he walked away. We proceeded to the Big Square to have dinner, completely shaken and in full understanding of why our Riad seemed so reluctant to let us go out that night. We heard this same type of story from so many people along our journey. It was really disheartening.

We realized immediately that we had no business in the medina alone, especially at night. So we hired a guide for the next day, which turned out to be a huge blessing. He took us to see some of the amazing things Marrakech has to offer, the gorgeous tile work, the beautiful university-Ben Youssef, the old hotels where the travelers would stay in ancient times. 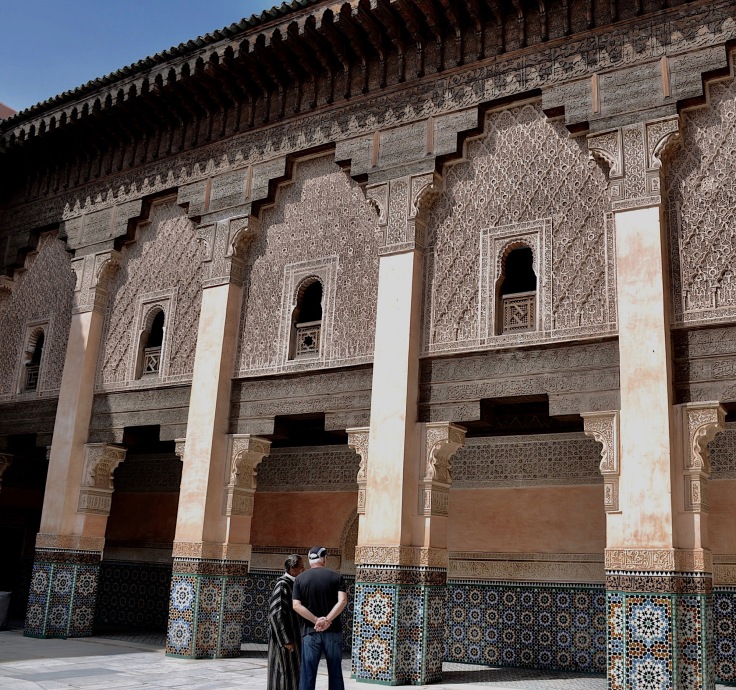 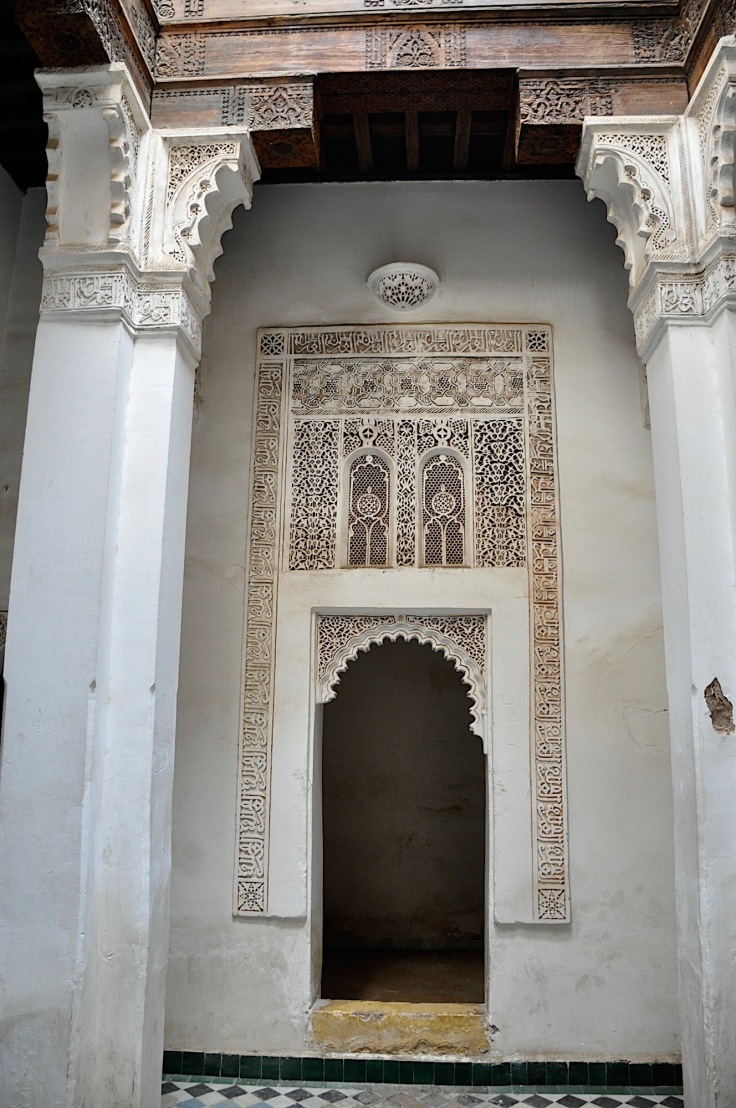 He taught us about the culture, and took us through the Souks. When we would try to take pictures of some things people would try to demand money from us, and when we shopped in the Souk they would be in our faces to buy their things and then harass us when we wouldn’t stop to look. It was just more of their culture-we are walking wallets. Our guide was truly amazing though, and the University we saw was incredible. It was free for boys who should intelligence and drive. They would study there, live there, pray there, and be prepared for jobs as adult men. The tile work was incredible, as were the little classrooms where the teacher and student would sit face to face, with another student in the rafters listening. Then the two students would switch places while the professor taught the same lesson again. They knew at the time that people learn better when working directly with the teacher, and with hearing a lesson twice.

Throughout the week we did go outside the medina to visit the Jardin Majorelle, which was so peaceful and serene. Yves Saint Laurant brought it back to life and his partner donated the beautiful sight to the city after Yves Saint Laurent died. It was a lush garden in the middle of the desert city. Once again we were harassed and yelled at, this time by a taxi driver because we wanted to walk not take a taxi, but we were now becoming more prepared for the insults and the people in our face. 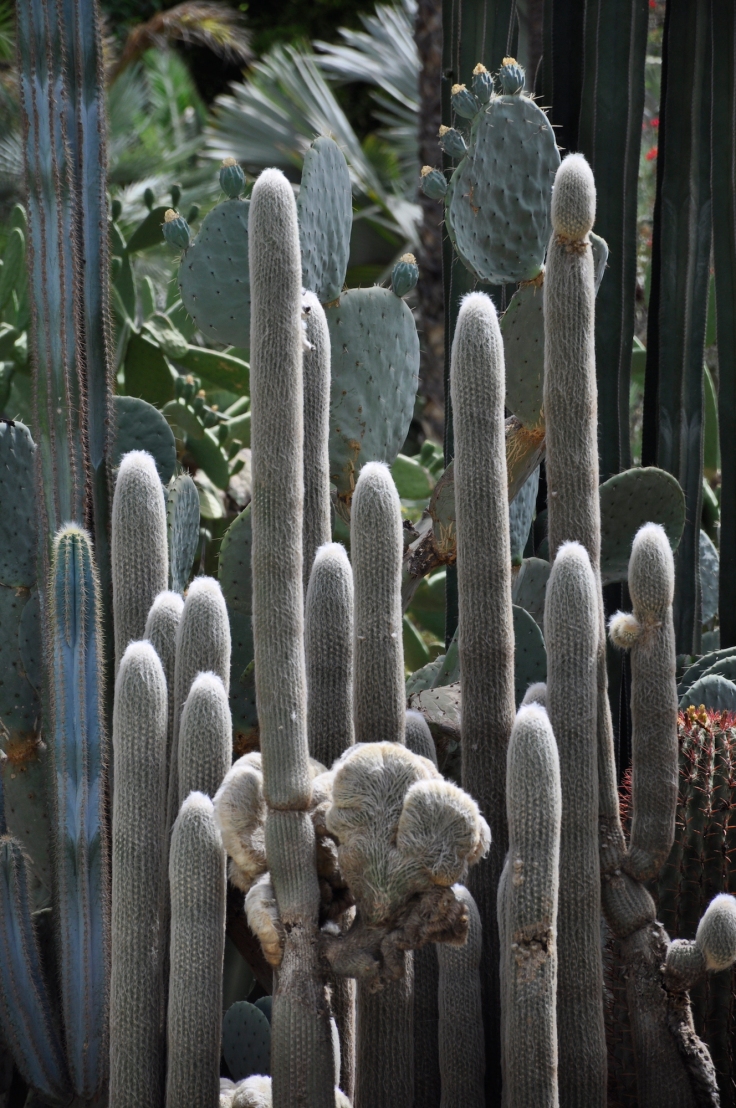 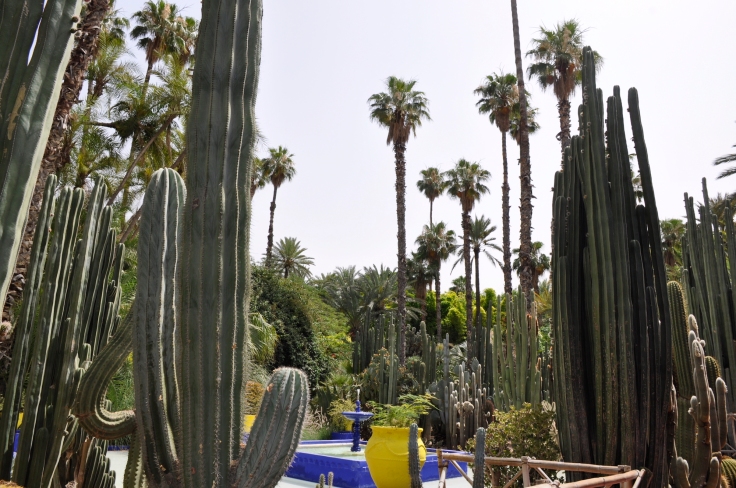 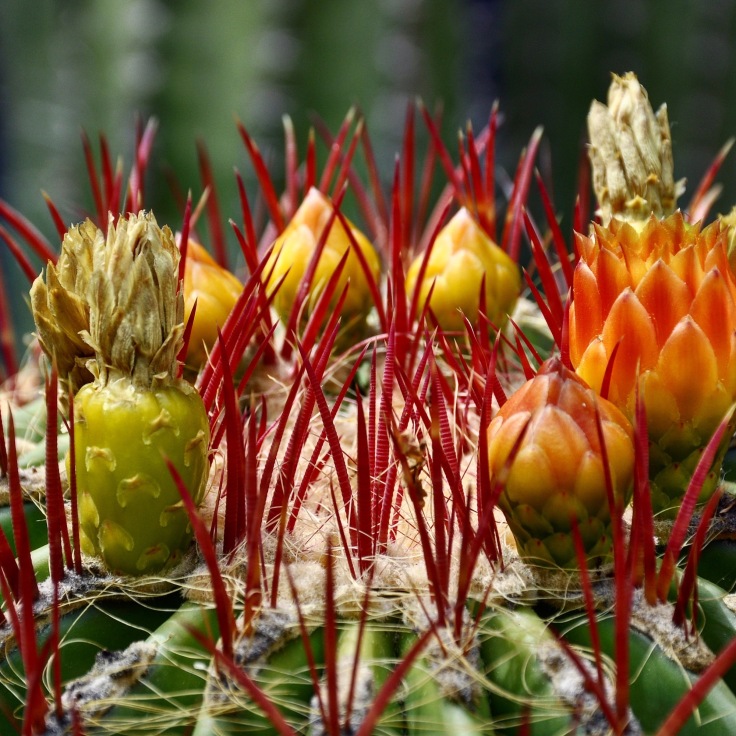 A few nights we went to the “Big Square” (by taxi) to see all the activity there, the men selling things in the stalls, the people walking around, the men with monkeys, and other tricks. Women were offering to do henna tattoos all under the dark night sky. It was a really crazy thing to experience. I will say we learned quickly, don’t let them touch you or they will want money, and don’t acknowledge them after a polite No. They won’t stop but if you keep walking they will eventually move on to someone else.

Definitely worth a visit was the ancient Kasbah where several people of the ancient royal family are buried. It was lost for many years but once recovered and restored it was an amazing site to see the incredible intricacies of the Arabic writing, and the beautiful tile work. 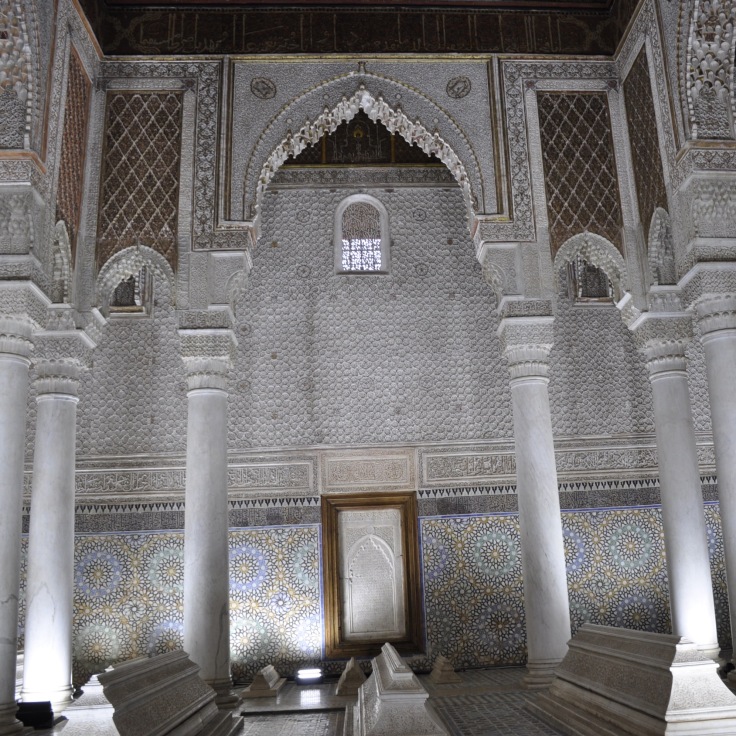 Because it was Ramadan we were able to witness the beautiful call to prayer at night, a special time for their holy month. It was quite an experience to hear the prayer and to witness their tradition. 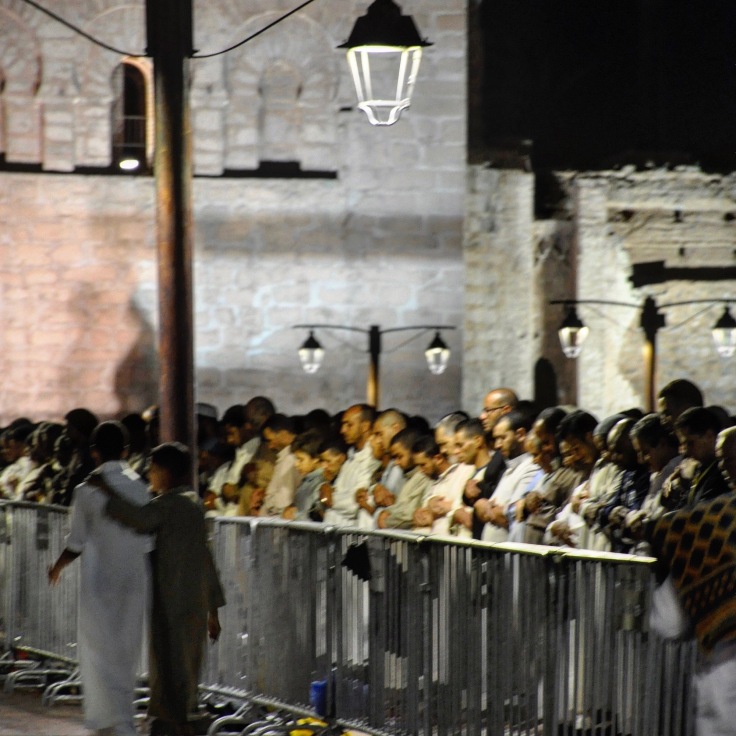 On our last day we ventured into a shopping area in the medina. We had a good time that day, joking with a few shop owners and buying a couple of souvenirs. It was hard for me to manage the anger and disdain of the people treating you badly when you wouldn’t buy something, or getting aggressive with restaurant owners when they were trying to beg at our tables and were told by the owners to move on. I guess after so many days there we were growing immune and were able to meet people who saw us as humans and treat us with kindness.

I had lived under this romantic ideal of Marrakech and my heart broke a little when it wasn’t our reality. We spent a lot of time in our Riad playing cards, writing, and getting a Hammam bath. It wasn’t the experience I had anticipated but we still made it fun.

I will tell you that the people who aren’t trying to hawk their wares are usually so nice. We had some good experiences with people but overall were just so overwhelmed with the treatment of us and other tourists. We were told to get out of flea markets and go to the Big Square because we were tourists and don’t belong in their city, we were called names, and experienced two taxi drivers punching each other outside of our car because they each wanted the fare. It was quite chaotic, and when the day came to move on we were happy to do so.

Before you jump on that plane, train or boat, check out my post on all the Do’s, Don’ts and Things To Know.

9 thoughts on “The Medina of Marrakech”