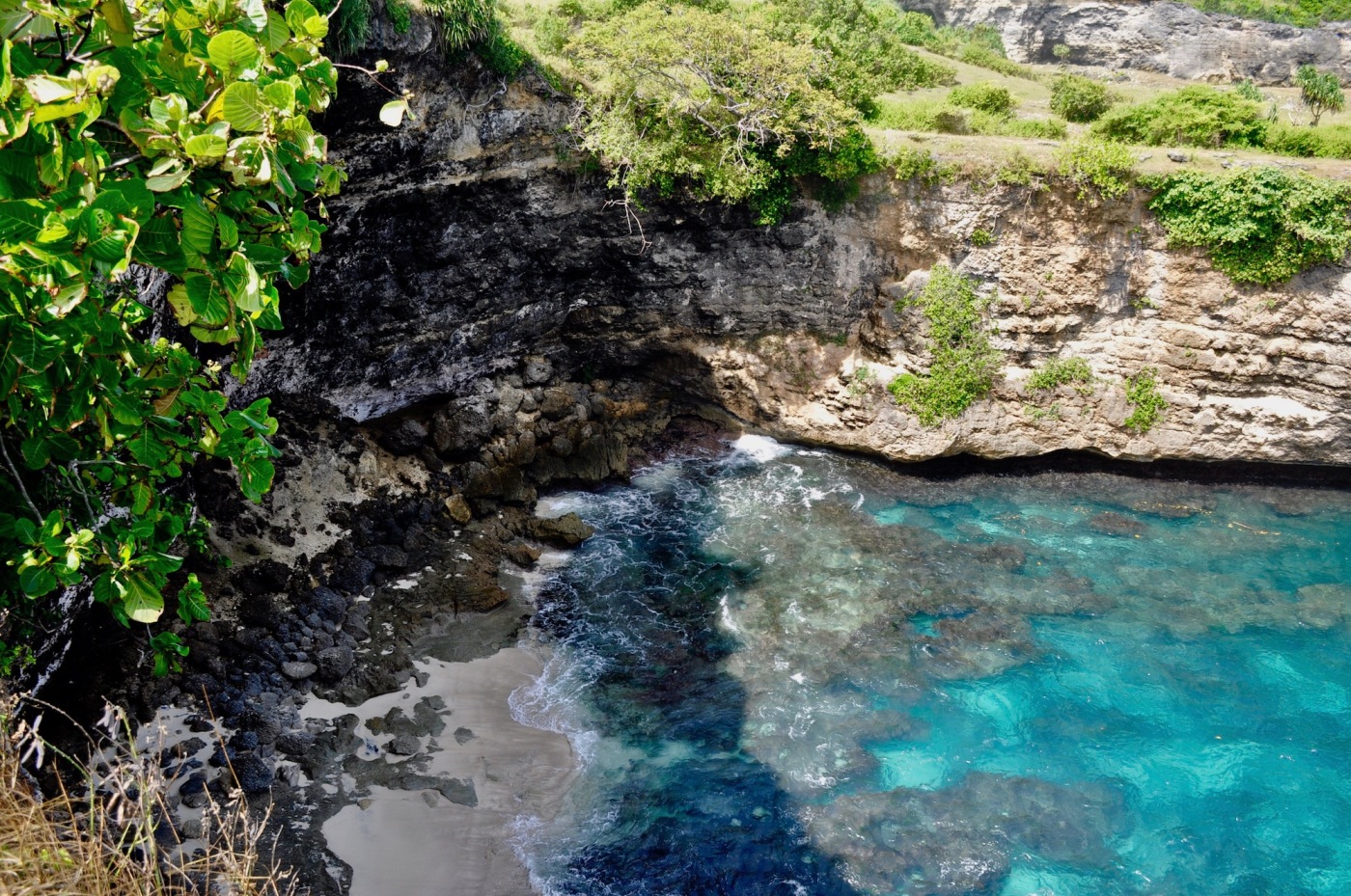 The first images I saw of Nusa Pineda sold me on a visit to the island. The dramatic cliffs, beautiful waters and special tucked away places are truly some of the most magnificent places I have ever seen.

A day trip to Pineda from Lembongan started out with a trip on a local boat full of women bringing their large baskets back from the morning market. They carry them on their heads after selling their goods to the locals on Lembongan. On the boat it was pretty funny to sit with them. They didn’t quite know what to make of us and I felt a bit like we were invading their daily lives. 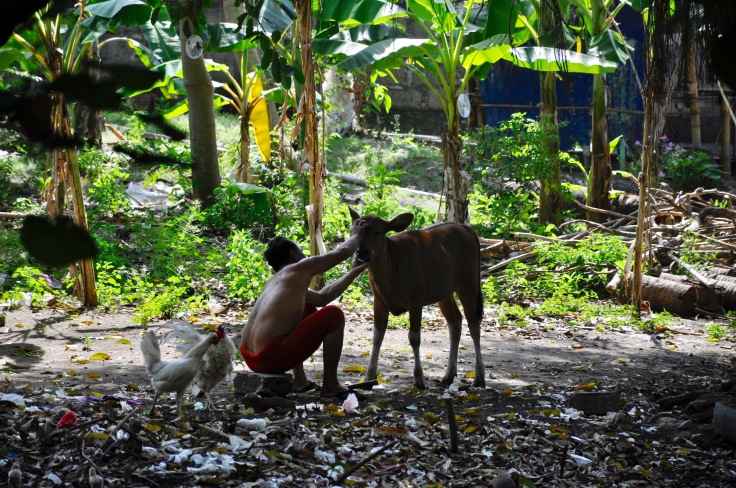 The trip is short, about 20 minutes. Our driver was waiting for us when we arrived so we headed off to the Bat Caves first. I had no idea what to expect at the caves to be honest and the surprise was actually really nice. The drive from the dock to the caves was beautiful. We drove along the ocean where people were harvesting seaweed and drying it along the mountainside. It is so beautiful to see the cloth laid out with all of the seaweed being bleached white from the sun. It looks like a quilt along the ocean front. 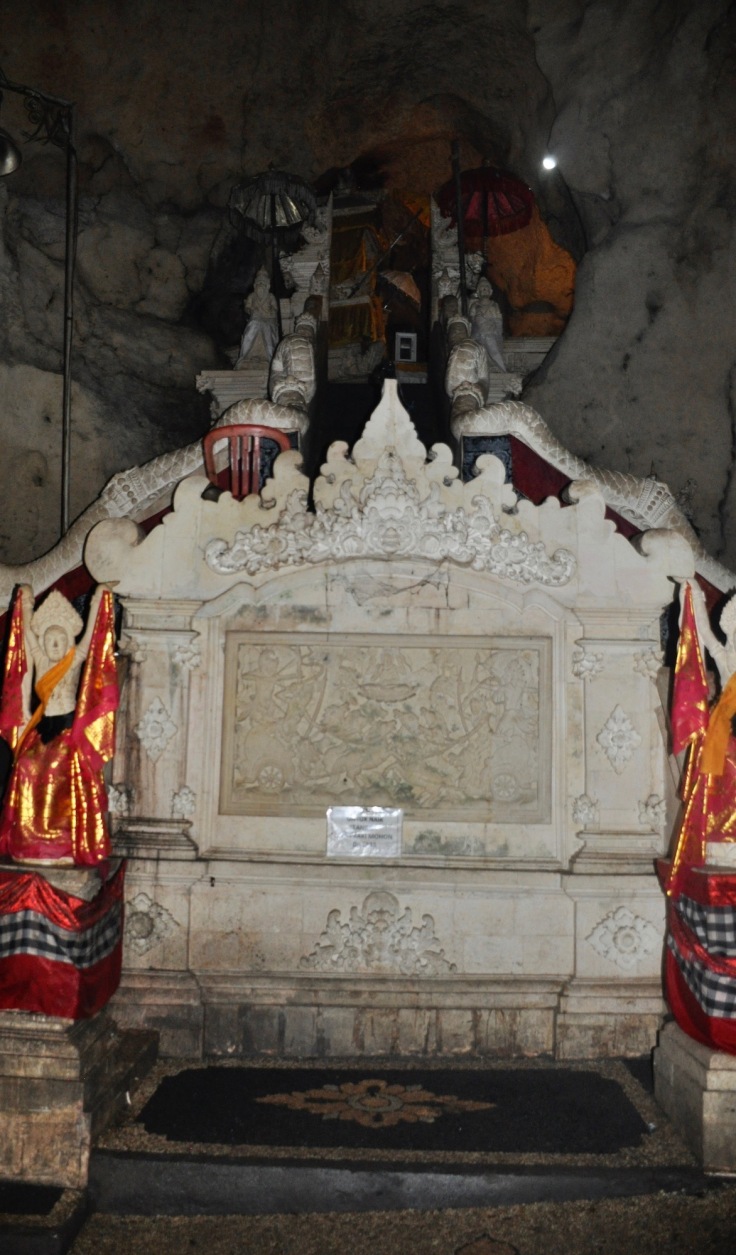 To get to the bat caves you have to be covered (it is a temple) and then walk up the side of a pretty steep hill. Once you get to the entrance they point at a little tiny hole and tell you to climb down it (which actually means slide down it). I wasn’t sure J could do it since he is clausterphobic and 6’4″, the hole was seriously tiny. However, he would not be deterred, even once he made it through the first one and had to crawl on hands and knees to make it through the second hole. Once you make it through the tiny holes the space opens up to a HUGE cave. There are some little paintings here and there along the walls as we walked towards the main alter. There is almost lighting in the massive caves even now so photos were impossible. The altar is Hindi and has been there for over 100 years. During WWII the caves were used by the locals to hide from the invasion of the Japanese. 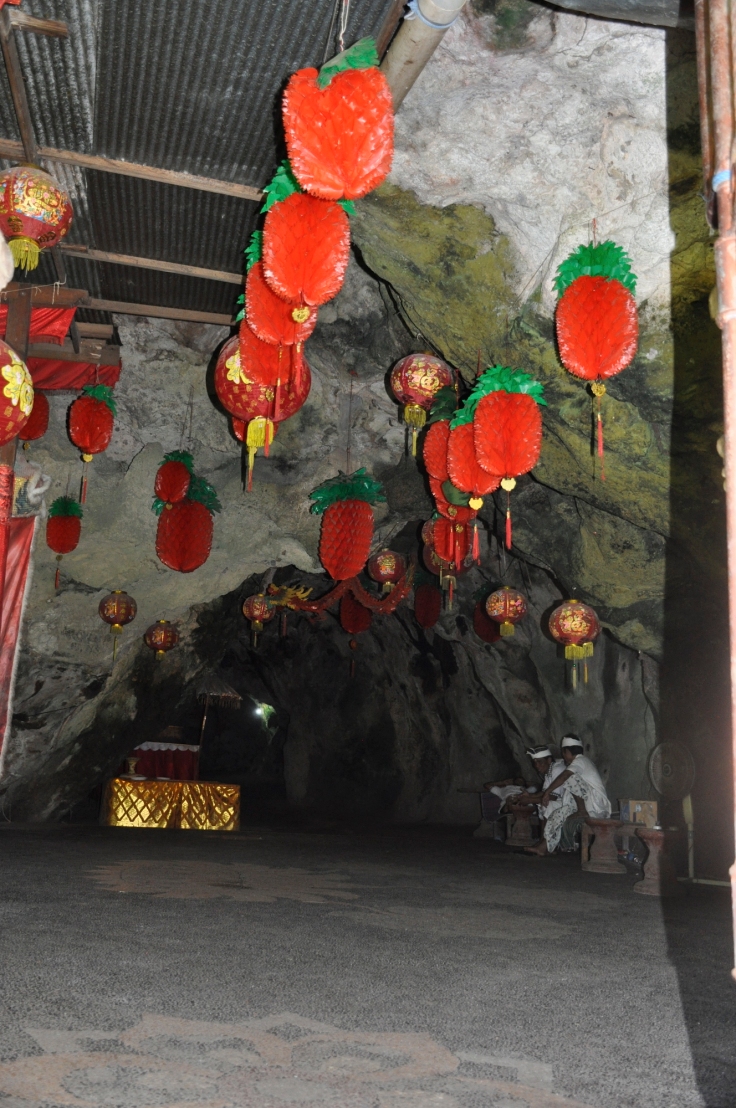 At the exit of the cave there is a Buddhist temple. I was surprised to see them both in one place but our driver explained that that is how it is, they respect each others religions and wanted everyone to have a place to worship. In the Buddhist temple there were mosaics on the floor and beautiful statues.I was really blown away by the caves, which were so simple but really held a feeling of safety and reprieve from all of the history of protecting the locals.

Next we were on our very, very bumpy, like hit your head on the top of the car bumpy, way to Angel’s Billabong, Broken Beach and Kelingking Beach. All three were seriously so beautiful it was worth every bump, divit and hole in the road to get there.

Kelingking Beach was our first stop. We had seen it from the water when we were diving. The coast line looks like a big whale from the water and from the top. The views here were absolutely incredible. I stood on the edge of the cliff overlooking the white sandy beach at the bottom. The breeze blowing through me as the waves lapped against the shore. The sky was completely clear as I watched the water move and crest. I could do nothing but observe the awe-inspiring view from this perfect place. Even though there were other tourists I felt alone, like time had stopped and it was just me, the ocean and the glorious landscape. A few people are brave enough to walk out along the spine of the whale, I however chose to stand in the moment, for as long as I could, and take it all in.

We agreed to even bumpier roads to get to Angel’s Billabong and Broken Beach after the promise from our driver that they were even more spectacular. He was right. 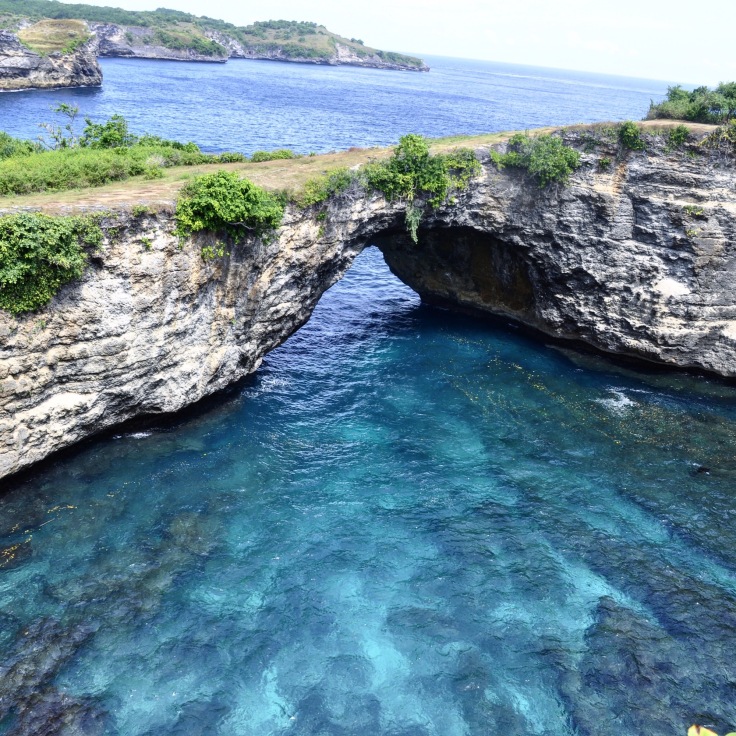 As we walked towards Broken beach I found a perfect moment in time. Have you had one? It was just me on the edge of this beautiful pool, standing over it, watching as one giant manta ray soared through the water. No one was around, no one made a sound, it was just me watching this amazing creature gliding around the blue green waters in search of food. I was mesmerized and so completely grateful for the show. The waves find themselves inside of this pool, gently they come in and move out revealing a beautiful sandy area with black rocks glimmering in the sun. If ever there was a place I wanted to swim, to just be with the water, the manta and the peaceful sound of the waves it was in this secluded pool. Instead I had to be content to watch from above until the heat of the afternoon sun, and J’s complaints of being too hot pulled me from the moment. 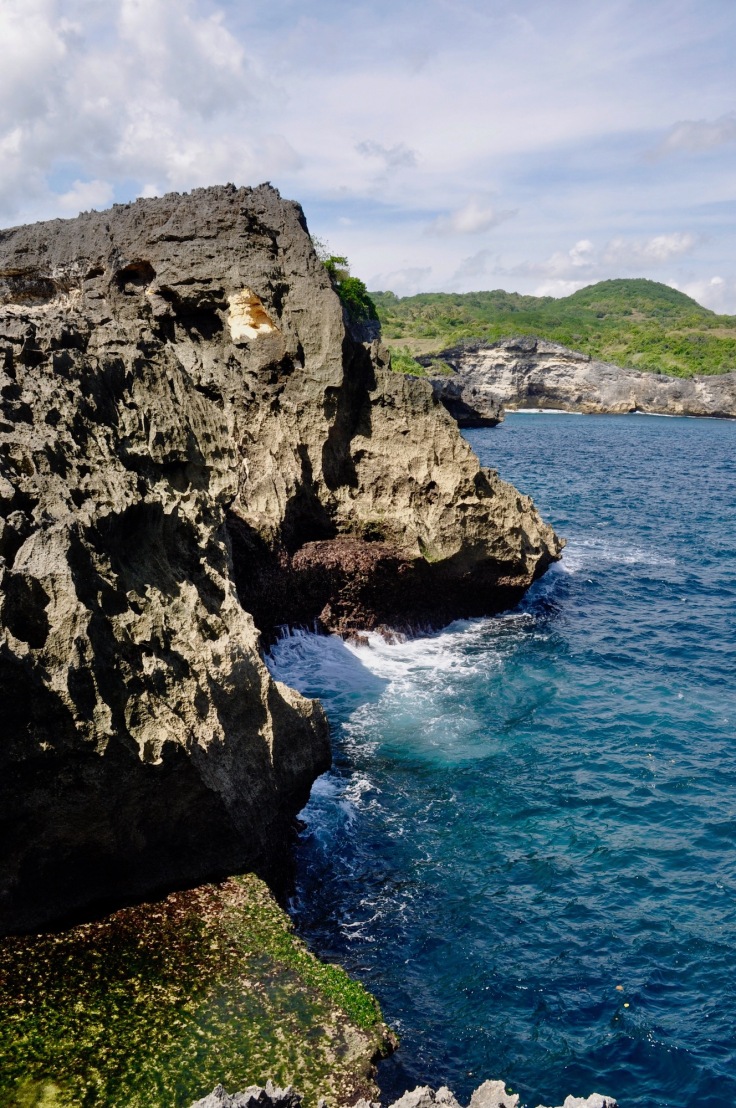 A short walk through the woods and we came upon the most beautiful lava rocks. Evidently we were there at the right time of day, when the tide has gone out and we were treated to a beautiful display of glistening rocks with small pools of water left behind. We made our way to the glory of Angel’s Billabong, a pool that exists at low tide where you can carefully climb down the lava rocks, and float to the edge of the cut out, and watch the ocean. There is a small window here because as the tide rises it comes through the cut out raising the water to levels which are very unsafe for humans. Until that time J swam to the edge, and enjoyed the view. The green water surrounding him as floated, were the perfect portal to see the lava formations under the water. Somehow they naturally formed these levels of green, blue and black, all of which beckon you to enjoy a swim, and take in all that this world has to offer.

I can tell you our experiences in Nusa Pineda were extraordinary. The relatively untouched island has so much to offer, it is impossible to leave there without a new appreciation for the planet on which we live. On this day, as we rode the boat back to Lembongan, I felt, to the very core of my being, the blessing I have of being able to make this journey.

A trip to Lembongan is not complete without a trip to Nusa Pineda. If you are as lucky as we were it is also worth it to dive along the reef. We were able to go with a dive master, just the three of us, to swim as the current would take us. The colors, the creatures and serenity did not let us down. There was as much beauty below the island as there is above.