After our 5 day trip to Bukit Lawang we were scarred that nothing else in Indonesia would measure up, until we went to Labuan Bajo. This quiet little fishing town on the island of Flores was the perfect place to spend a week. Never in my life have I seen views like the ones from our hotel, Villa Dominik. If we had done nothing else but sit and watch the world go by on this gorgeous island it would have been absolutely perfect. Of course, we didn’t do that and it was still perfection. 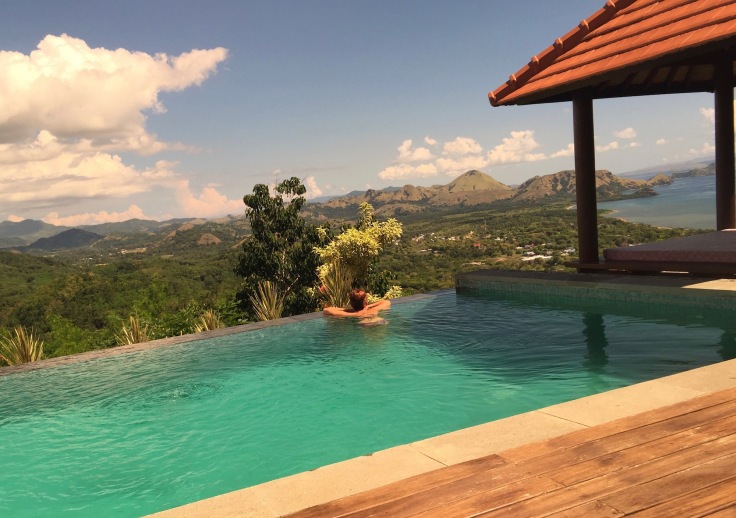 The town of Labuan Bajo is located on the western end of the island of Flores. We flew on a tiny plane from Bali, about an hour and a half flight. Then we headed to one of the most beautiful places we have ever stayed, Villa Dominik.  The drive there was breathtaking as the views of the ocean and the surrounding islands entered our views. The road winds around to share glimpses of the “downtown” area, the marina and the islands that softly expand out into the beautiful Indian ocean.We continued to weave our way through the area until we ended up in the “downtown” which is not much more than a small street filled with restaurants, cute boutiques and dive shops galore. While it is still a bit rustic the shops and restaurants could rival any we have seen elsewhere.

We chose to stay in Villa Dominik because it was located on top of a hill which overlooked the surrounding islands, the mountains and a small valley below. I spent a lot of my time looking at this view from the pool and never got tired of it, especially at sunset.

My main reason for going  to Labuan Bajo was Manta Point. It has been my dream to dive with the giant manta rays, along with every other large creature under the waters surface, and this dive site is a great place to do it. The current is strong but for me I didn’t care if I had to be strapped to the boat, I was going to dive with giant mantas. So when our second day in Labuan Bajo arrived I was so excited to get up and dive.

We had about an hour and a half ride through the various islands I had been gazing at in the ocean. We climbed up to the top deck, laid in the bean bags (under a cabana for those of you worried about my sun exposure) and watched the mountaineous, mostly uninhabited islands pass by. 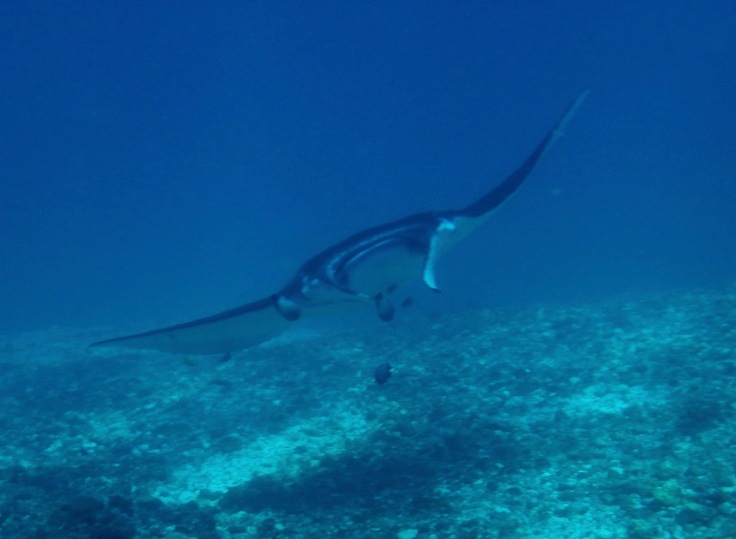 We were very lucky as we pulled up to Manta Point you could see the giant manats off the side of the boat! Once we jumped in the water and descended we were in the midst of them. The whole dive was amazing, including the mating dance of four of the mantas who swam in circles over our heads. It is probably the most graceful thing I have ever seen in my life. I didn’t mind the scratches from the coral floor as I grabbed hold, or the struggle to find coral strong enough to hold me as I stared in wonder. None of it mattered as the Mantas swam so close to us I could feel the water change around us.

We also visited Komodo Island to see the dragons, which to be honest was quite underwhelming, for me anyway. They look like giant lizards, but are so mean they eat their own young. We walked around with a guide for about an hour, a very hot and dry hour, until we boarded our double decked dive boat to head back.

Unfortunately it was our one and only day of diving as J. got very sick and was unable to do much of anything for about four days. We did manage to get out into town for lunch and coffee a few times. On an island that doesn’t get much rain during May it managed to pour rain every time we left our beautiful hotel. The rain came down in sheets, turning everything grey and flooding it with much needed water. Luckily afternoon rains only last for half an hour or so and the rivers of water rushing down the streets were quick to run off into the dry ground.

We felt so at home in this quaint little village, each restaurant owner/staff was so friendly and helpful, the dive shop staff lounging in bean bags along the road drinking an after work beer, and the curious children saying hi as we shopped all made us feel so at home, and quite devastated to leave.

~The easiest way to get there is to fly from Bali or Lombok. A 20 minute cab ride will have you in the downtown area of Labuan Bajo. We absolutely loved everything about Villa Dominik and can’t imagine saying anywhere else. You can’t really go wrong with the Italian restaurants downtown or Bajo Taco. Cafe In Hit was our favorite coffee shop in town. Diving-well for us there would be no choice but Komodo Dive Center.

~If you decide to fly it is worth noting 2 things. The cheap airlines have very low baggage allowances and charge a lot for going over. Also, there are airlines in Indonesia who are not allowed to fly anywhere else in the world due to their horrible safety ratings. So check out their ratings if you are as hesitant to fly as me. We found it was worth paying extra for a better airline, higher baggage allowance, better safety ratings, and actual service on the plane.

4 thoughts on “A Week In Labuan Bajo”